My hitchhiking adventure for sixty thousand kilometres in five continents awarded me with vivid stories, both positive and undesirable experiences. Sometimes waiting for a lift was tiresome, seemed like a watch stopped ticking while you were surrounded by sand dunes in a desert sun. Sometimes you stand by the roadside with your thumb, while hundreds of cars pass completely ignoring you. Yet overall, my longest and most exhausting wait for a lift in Northern rural Mozambique savannas.

I was sitting there and waiting surrounded by complete silence. The first hour went fast because I still had great emotions from the previous ride and driver. Yet he noted that to get a lift beyond that point will be difficult. Oh, that sounds like a challenge, and I like them, but soon my courage will fade away. The driver told me about wild animals including tigers, therefore I was looking all around to spot them. I never saw predators in the wild. Driving the back of a pick-up truck, it seemed like a safari but for free and more adventurous, in comparison to those overweight, middle-aged men crawling in an SUV at the airport, being driven to see lions in national parks, later spending few nights in five-star hotels drinking champagne and flying back, but I was on an adventure here! If I could just spot an animal from far away, I would be so happy! Anyways, memories of wind gusting into my face, hair blowing like I was driving a motorcycle in African savannas! Colours are bright here in Mozambique, unpaved road is bright red surrounded by overgrown grass, which all looks like a shot from National Geographic. Not long after, the driver stopped, met a local man and found a chair for me to sit, waved goodbye (and good luck), turned around, left and I was hoping for next lift. 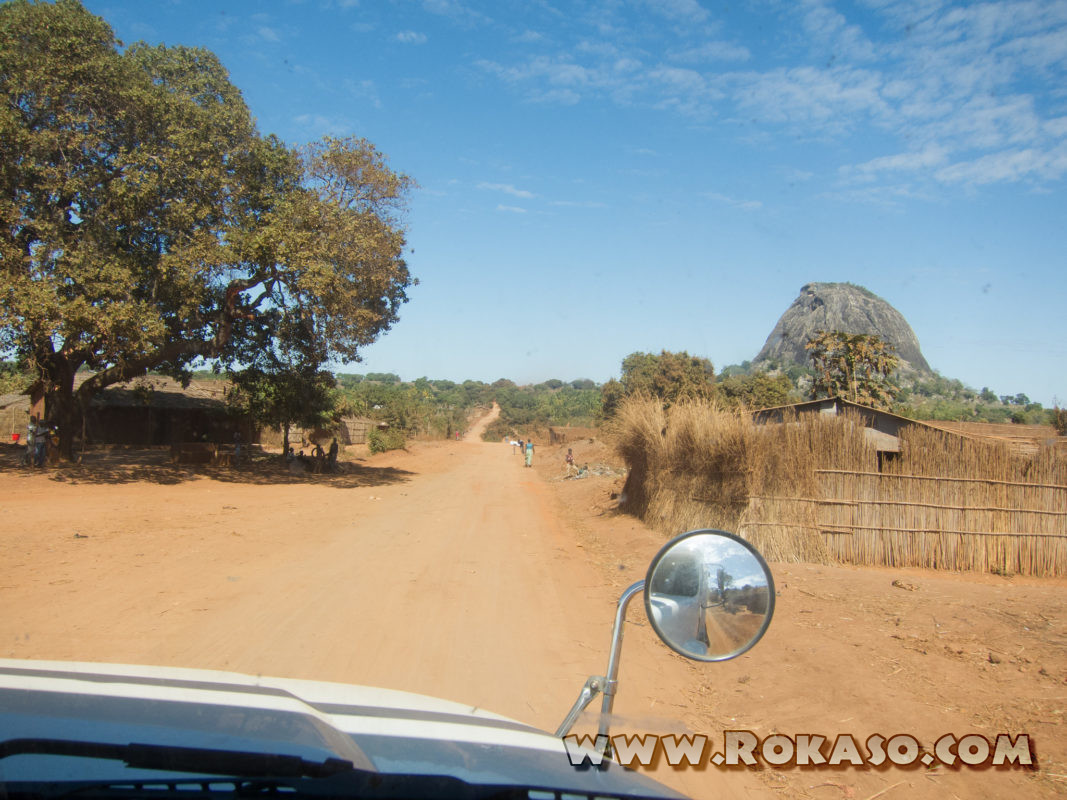 While waiting one hour passed, and another, and another, yet the road was completely empty. Not even a single car came. When I started hitchhiking that route, my average wait was an hour, so I was already getting suspicious about the totally empty path.

A settlement, where I got stuck, was minimal, having only a few huts for an extended family. Like the majority of people in Africa, they were farmers mostly producing food for themselves, and sometimes, if they got extra, they sell it. The huts were made mainly from materials found around the area, for example, small branches, straws and clay.

Yet another few hours passed. I was becoming highly aware of my food and water supplies. Surely, there were no shops around for miles. I should be able to get water somewhere, but the quality and bacterias might kill me. Locals probably were used to it, but I am new there and could not take the risk. At least for now.

Sun started settling down, shadows lengthened and I was still waiting. Already 6-7 hours passed and still quiet. Usually, when I hitchhike and get stuck, I set a deadline for me, for instance, if I cannot get a lift in two hours, I will walk back to a town and take a bus or that, I will go to have nice lunch and continue hitchhiking. It is always nice to know that you have an escape if something goes wrong. People like to have control over their lives in every moment. This, unfortunately, is not always possible, therefore, same humans invented supernatural creatures who governs you and lets you believe that everything will turn out alright. Every one of us heard cheesy quotes like “Everything will be okay in the end. If it’s not okay, it’s not the end”. This been running all over my mind, yet this moment I had no control. I wanted to continue my journey into an adventure, into a bush, see, what’s happening there! But I have stuck away from civilization. 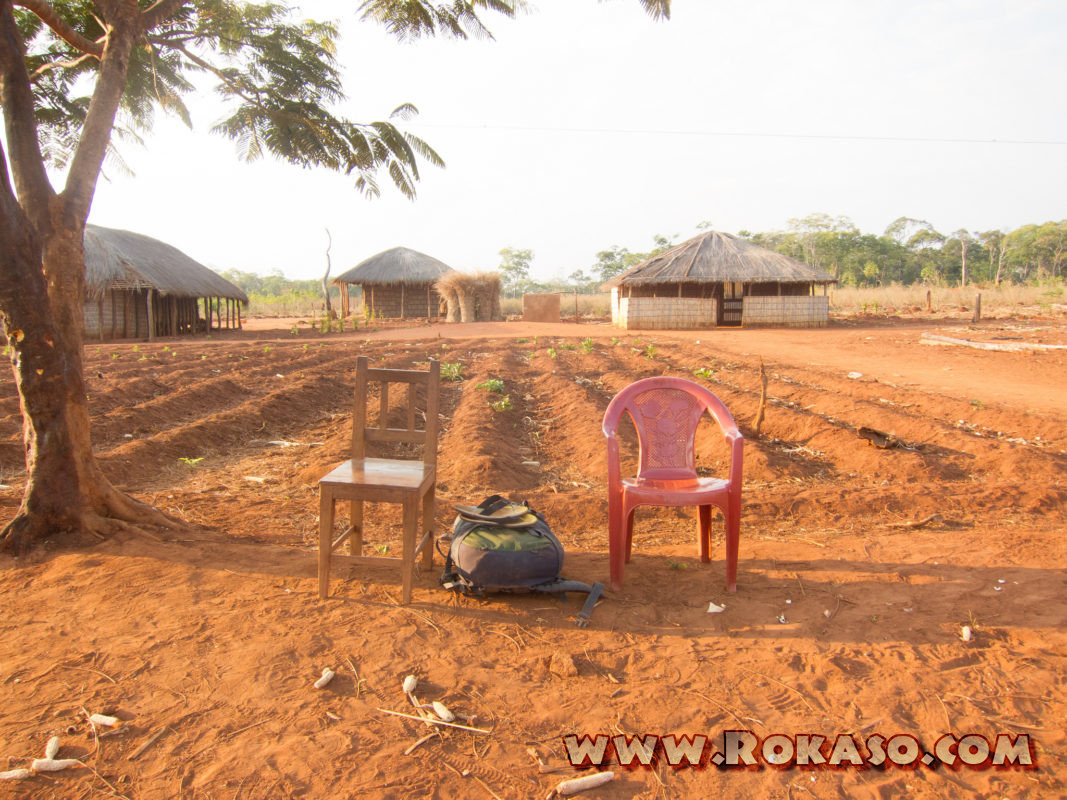 I wait some more and more as I had nothing to do. This was my personally most boring hours of my life. Nothing to do, just watching down the road for hours and seeing nothing. Leaving your position is not an option because you could miss a lift, which you been walking for a long time. I could not get bored again when (or if) I got back to the Western world. Completely devastated. When your mind is preoccupied with worthless things like Facebooking, watching TV and being always busy, you ran away from your thoughts, they are not there. But when you are alone with yourself in empty space, and you cannot escape this by connecting to the internet, chatting with acquaintances, watching TV or reading a book, you start questioning existential questions like “what do I do with my life”, “why I’m here, while my friends are having fun”. Generally, all hardest days of my life, when I was unwillingly all by myself. You are only one from that inner chatter box. Either you win, or you lose. Tony Robbins said, that one of primal human needs is progress. Even if it was the only half day, my inner chatter box was questioning existential questions “what are you doing? Why are you not progressing?” as I started stretching and replying “look, I’m doing something, and progressing”. You can always improve the body, whatever your situation. Jailed prisoners know this.

Anyways, what would happen if a car comes, but is either full, or a driver won’t stop — Thoughts like this runs in my mind

After some time, kids gathered around me, started looking, and we had a game ­— do what foreigner does. I wave, as they repeat after me. I touch my nose, and again they repeat. For an hour, we had this game and it was entertaining, but the children got bored and left. Oh no, the foreigner is no more interested in that settlement.

There were people around me who are friendly, smiling people. In African villages people collaborate with each other, helping with tasks, nurture all neighbour’s kids. When a person lives in a small community, one gets responsibility for the well-being of all members, one must be friendly and caring, you cannot run away from your village and your people. While in comparison to the polluted metropolis, where faces change daily, your friends change frequently, you have limited time after work. African villages also have very little thread of terrorism and crime rate, probably because there is nothing to steal. Here comes main disadvantage – poverty. Depending on the season, people might have extra crops to sell, or not. In infertile years, it is not even sufficient for all members of a family. The industrial revolution is the solution to hunger, which reached even most remote parts of the world, but not everywhere. In the settlement, they are still farmers eating what they produce. The local currency in my pocket might be worthless here, yet I am hoping that it is not the case. 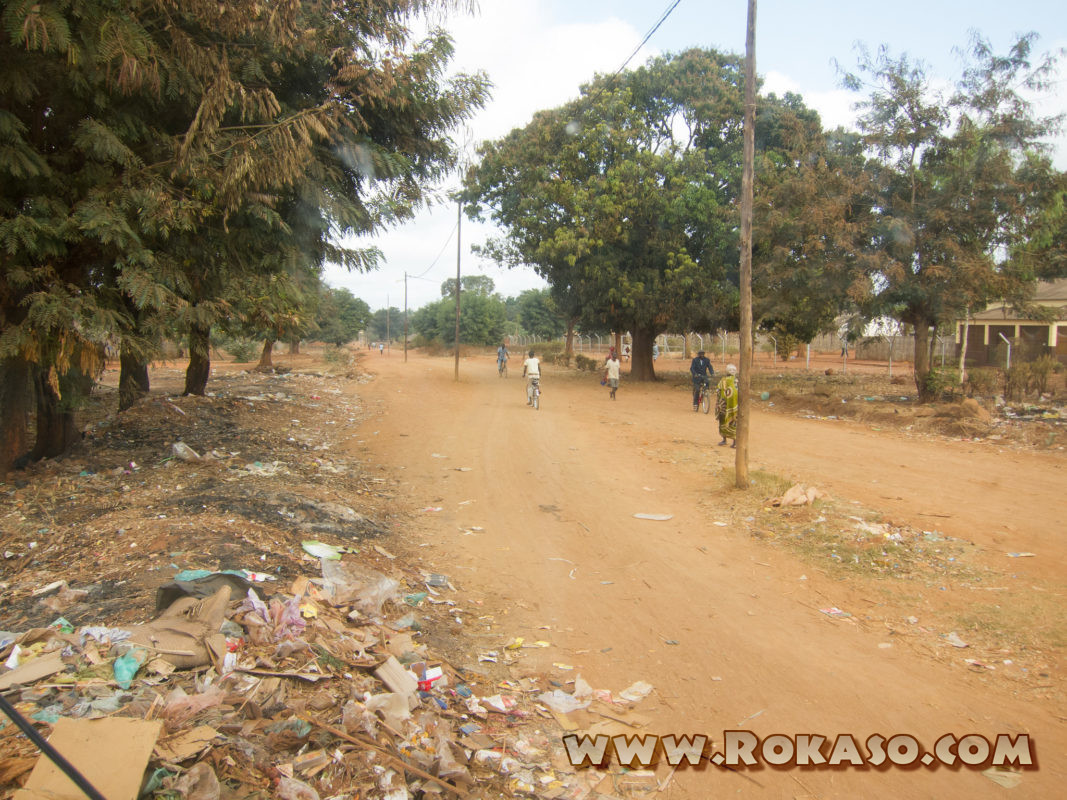 The problem here was a language barrier as I spoke little to none Portuguese, and they spoke only regional languages or, the most educated members, Portuguese.

It started getting dark, still, extremely quiet. A local man gave me dinner, some flour mixed in a bowl. I guess it was pouring with goat milk cheese and sugar.

Food affects your mind, it gives you a sugar rush, imaginary energy. I instantly got a flashback to my last rides on this route, where I was waiting for a lift for an hour in empty road, again, hundreds of miles away from an internet connection. Suddenly a truck arrived and stopped for me. We took off into rough, dodgy route. For the driver it was a daily road, for me, it was lifetime adventure. Yet, I cannot call that thing what was there a road. It was merely a single way path in a reddish savanna surrounded by tall yellow grass. As we drove, I could see indigenous people walking ahead, who quickly disappeared into a bush. Dust was in the air, new territories appearing behind my eyes. I was wondering, what will be in front of me. The scene looks like a shoot Dakar race in the truck category. By this time, I got started getting used to this, but my other surprise that driver was from China and I had no idea why he was there. Soon my question to be answered. There were Chinese contractors building roads, mines and other infrastructure. This was my first encounter of China’s workers in third world country building something. Fast forward few years and I have met Chinese all over the world, who build roads, owned shops, restaurants, factories and farms. Once, I was staying with a Chinese family in Zambia, not far from Northern Mozambique, who was telling me around saturated Chinese market and limited possibilities for business. In Latin America, many business owners were from China. My home city in Lithuania named Panevezys is homogeneous, while only foreigners being Chinese owning cheap clothing store and an Asian food restaurant. Let’s go back to the initial story and a truck in African savannas. It got slower, turned right and stopped. This was time for me to leave the truck and find another lift.

I was still waiting for a lift nearby the road. Later the local man showed around his farm and I placed my tent nearby.

Waited a bit more. I could not believe, that the road was completely empty. Not even a single car passed from the morning and now it was already dark.

I was exhausted and went to sleep. Next morning, I woke up together with the sun, packed my tent and started waiting while to lose my hope, when I heard the noise! I could clearly hear it from miles away and ran to the road, waving my hands and hoping that the driver stops. What happens if he does not stop? I could pay whatever I have in my pocket if he drives me away. Fortunately, the trucker slowed down and stopped. I rushed evidently, opened the doors and negotiated my price for a lift and I was finally off there! Actually, the truck was going back the way, I came, but that did not matter, as long as I am moving again.

After this experience, I was trying to always stay on main roads between countries and not to get this stuck again! My total wait for a first transport to arrive was around 18 hours there and by far the longest in my hitchhiking career.

Northen Mozambique was in rapid progress of building roads. Even the road was on the way to being paved. So probably it was once in a lifetime experience and could not be repeated. Yet who knows, there are countless roads and paths around in the world for your next adventure