I have recently been receiving various questions regarding a trip to Cape Verde. Here is the list of the most frequently asked questions (FAQ).

Cape Verde is an islands nation not far from Senegal and Mauritania. It’s combined of 10 major islands where 500 000 people live. We have visited a small island called Sal, because of cheap flights there. It has only 20 000 permanent inhabitants while according to our estimation at any day there are around 5 000 tourists which makes a significant part of the population.

Sal island looks like a desert (or dessert, not sure which one, but I mean the one with a sand). It is because it receives a big amount of Saharan winds. Also, it has several hills highest being 406 metres.

The islands were uninhabited until Portuguese in 16 century. As a slave trade began, lots of Africans were transported to the islands where Europeans were settling in as well. People mingled and created a new race which contains both European and African features. Probably something similar as in Brazil, another Portuguese colony, where around 100 million people have ancestors both Africans and Europeans. 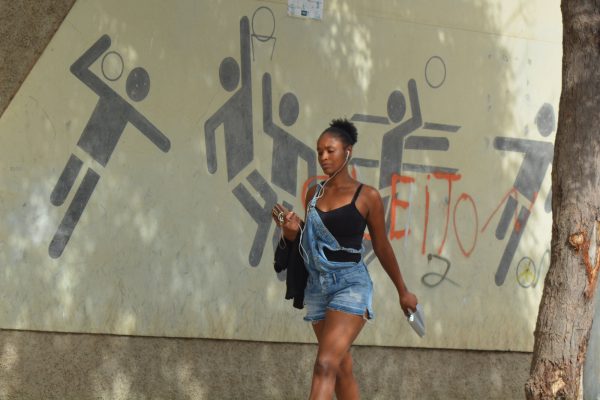 Even their hair bleaches because of the sun. 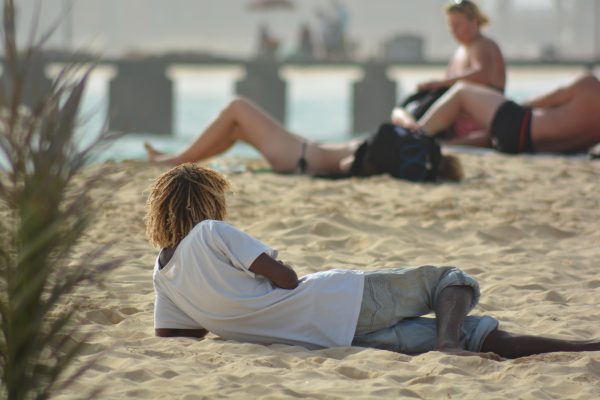 Yes and no. Yes in a town called Santa Maria, where all resorts are situated. There are only foreigners walking on a beach. 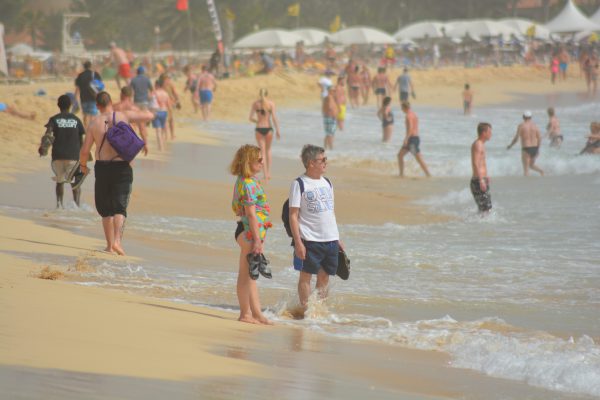 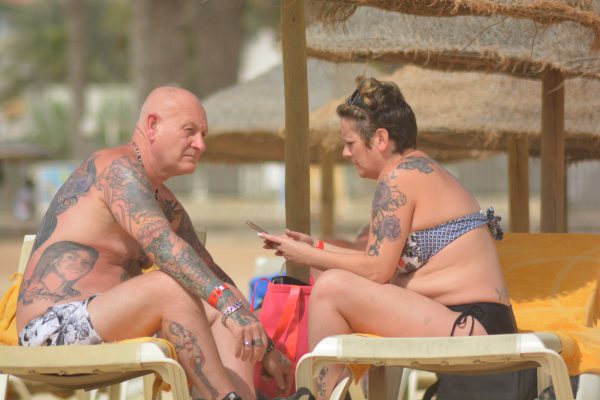 However, if you walk for just 10-15 minutes away, you will find places rarely seen by any tourists. You know, Cape Verdian stuff… Kinds playing football, and that game you-throw-rock-I-protect-with-a-shield stuff. 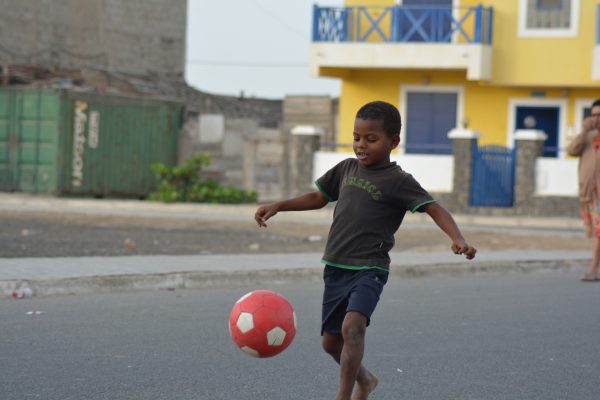 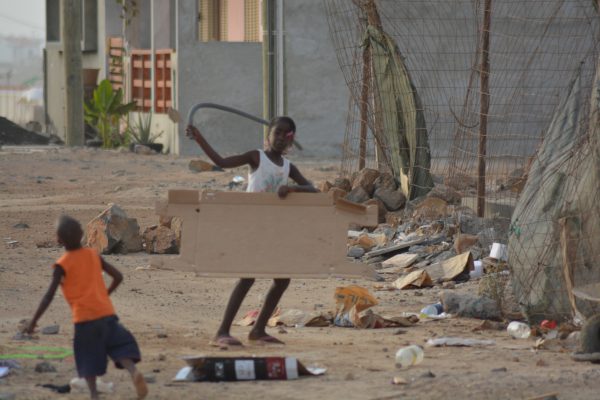 What are top things to see?

a. Salt Pond. Remember your classmate’s pictures from the Dead Sea, where he been floating on his back and reading a newspaper? Well, the dead sea is not so unique as many ponds on the water around the world contain similar consistency of salt. It’s also on Cape Verde’s island Sal, where the name comes from meaning Salt. Entry is 5€ and another 1€ for the shower. 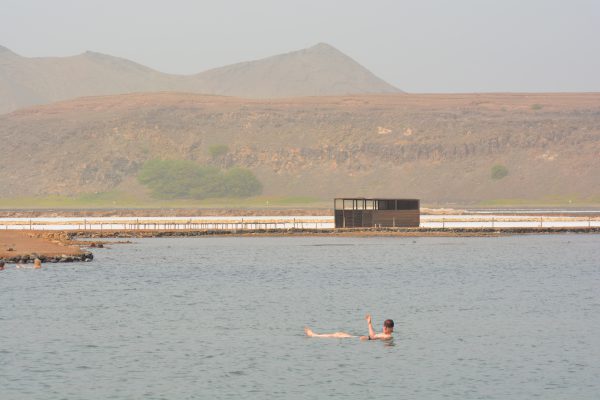 b. Place where you can see baby sharks. Awwww. 6 hours hike away from Santa Maria, or just 30 minutes in a SUV or a quad, you will find a little rocky beach with people walking for a hundred metres into the sea with water level below their knees. They are looking for baby sharks, and to get a better Instagram picture, guides pour tuna blood into a sea to attract hungry young sharks. 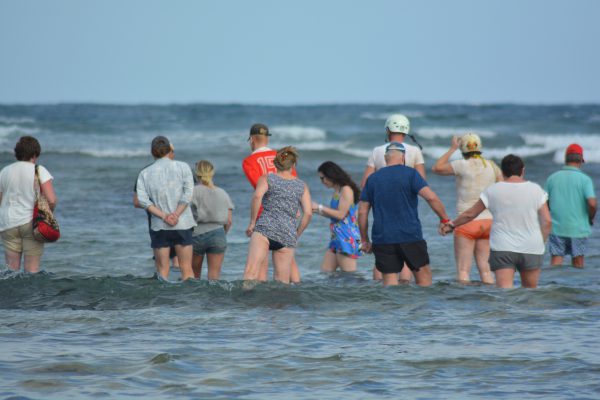 c. Blue Eye. A pond having unique blue colour. We visited the place, but couldn’t see the fuss about it. Probably because I can’t distinguish more than three shades of blue, or because it was still too dark outside

d. Underwater caves, corals and wrecks. Scuba diving was nice, even getting seasick and vomiting didn’t spoil the fun.

e. Hiking. We have done two proper hikes both spending a night under the stars.

First was in northern part. Fauna (or more correctly no fauna) reassembled typical Saharan landscape – dry powdery sand and few brushes here and there. We met no other person in a way 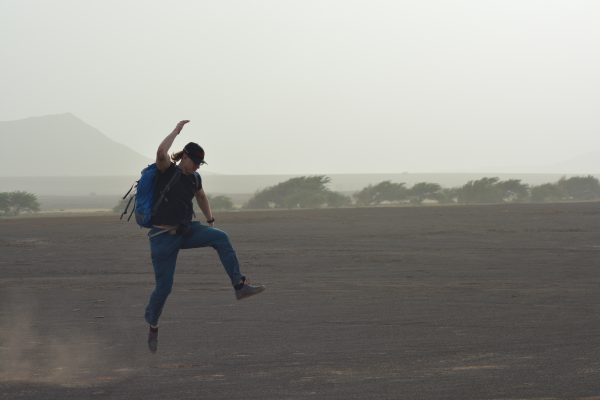 Another was compromised by unexpected treasures including sand dunes, cliffs, shipwrecks and Game of Throne rocks. It was a pleasant hike along the coast as well. 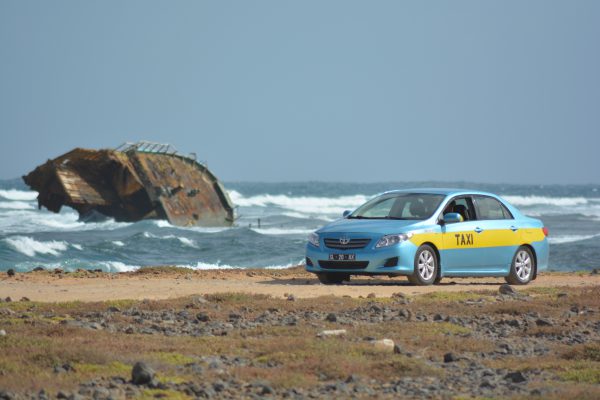 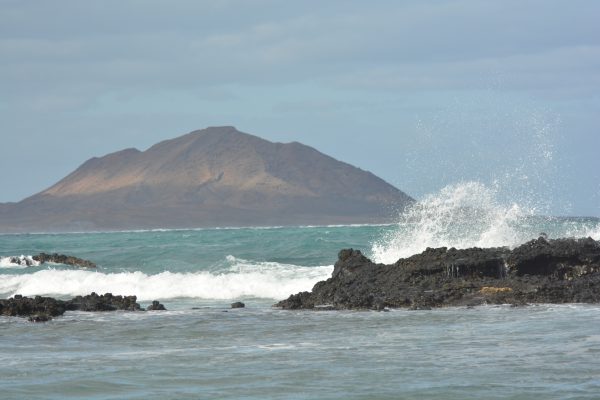 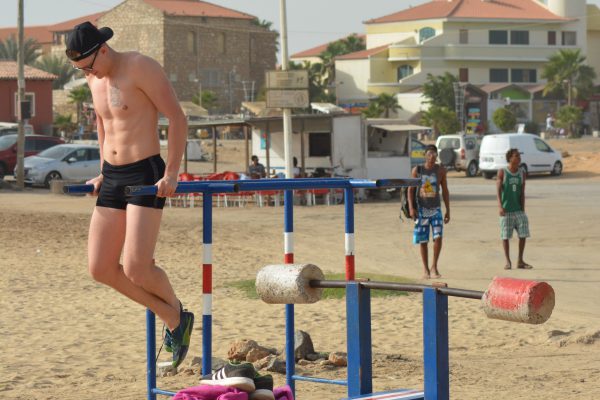 g. Chill out (or as locals say “No stress”) and enjoy pleasant weather, white sand and blue ocean! Staring at passers-by for hours and drinking your espresso is another hugely popular activity on the island. And enjoy Africa! 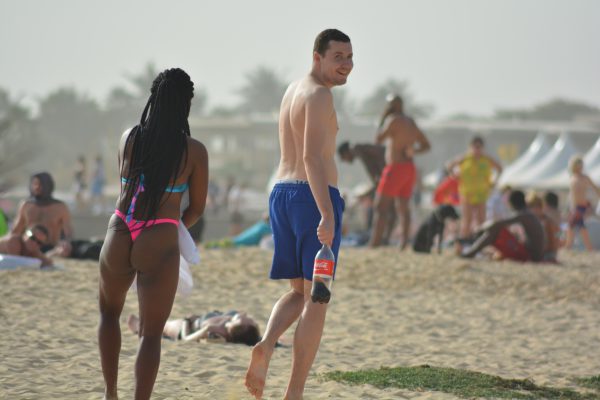 How colourful is Cape Verde?

Surprisingly, there are other colours than just black, greyish. 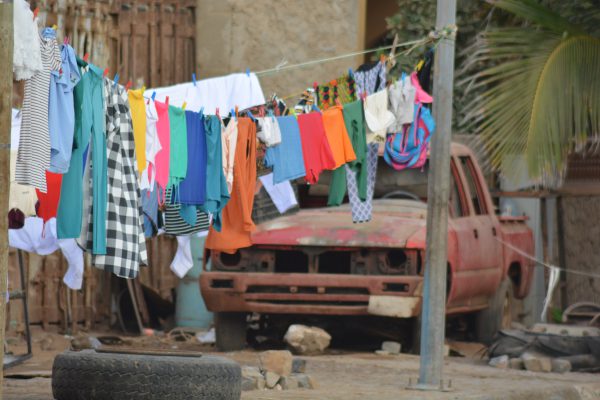 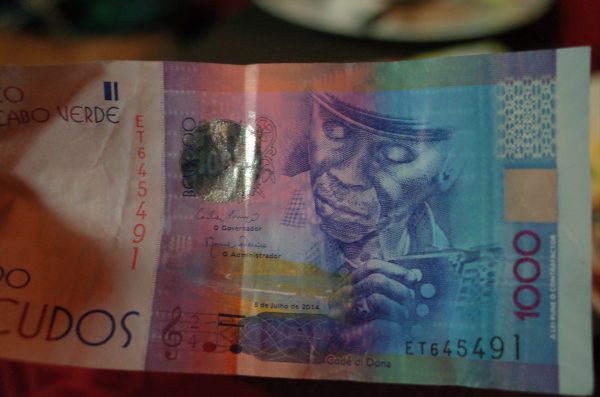 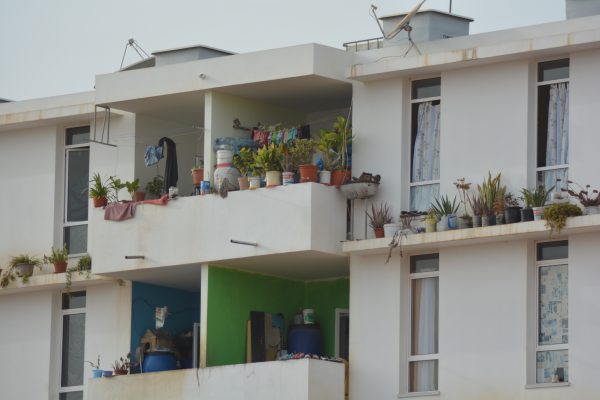 What do they eat? Will I get food there?

Yeah. Full ocean of fish. People there are actually healthy looking due to the quality of food they get: lots of protein, good fat and little junk food. As a visitor, you can hit local cafes serving thick tuna steaks for only 3.50€. Even for a typical breakfast, you’ll get fried fish with a weird stew.

No food grows on the island as it’s a desert, so everything has to be imported, but you can reasonably cheap get vegetables, red meat and chicken. 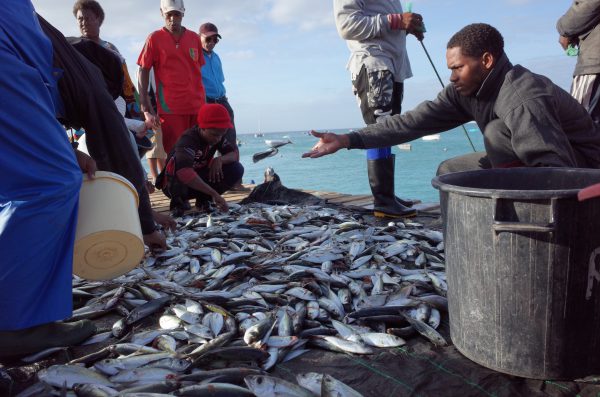 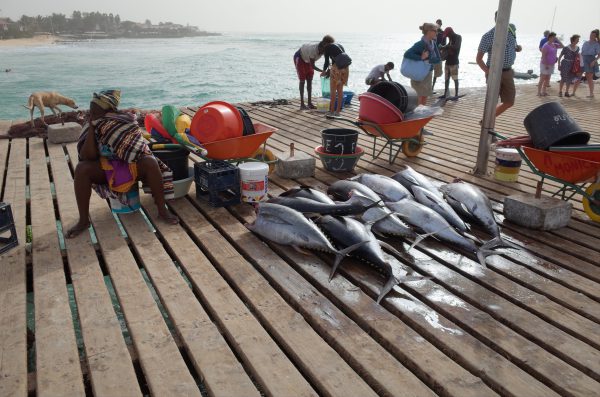 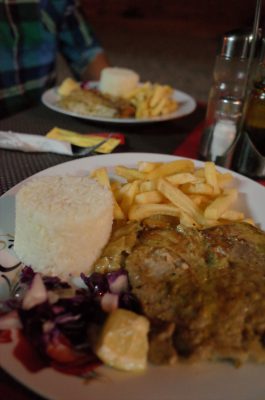 How to get out of the other island in Cape Verde?

Flight? You can book flights way in advance for a reasonable price. It’s about 80£ return to fly for 40mins to capital. Yet travellers say that it might also be unpredictable as weathers changes

Ferry? It was our option. I checked the prices on the internet and it was a 20£ return to the closest island. When we landed, we headed straight to a port and asked about the ferry. The answer was “yes, it is a ferry tomorrow morning”. Hell yes! Let’s go! I started asking more questions, and one destroyed our hopes – “when it comes back?”. Travel agents just shrugged their shoulders and a silent “maybe in 5 days… maybe in 8 days….”. So we ended up on the island for a whole week. 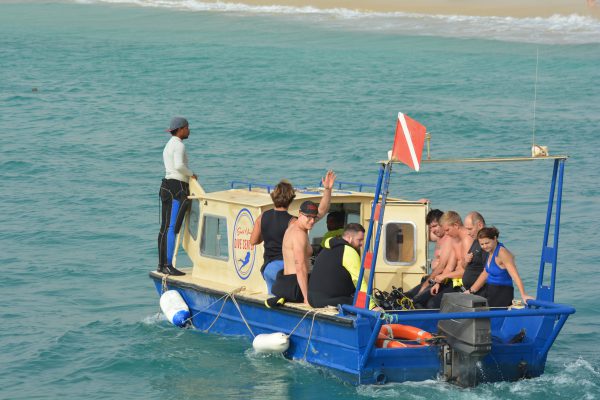 What is Cape Verde slogan?

“No stress”. It’s everywhere and you will be told that at least dozens of times a day.

Even shop owners grabbing your hand, pulling you out of your direction and shouting “no stress! Come to visiting my shop”. 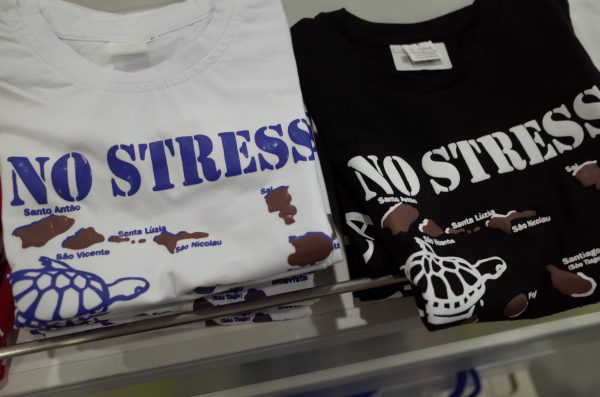 What languages do they speak?

Portuguese as an official language, and Cape Verdean Creole, which reassembles Portuguese but also highly varies from island to island. With my Spanish knowledge, I could easily communicate with locals on a basic level. English speakers are not hard to find as anywhere else in the world.

What are prices in Cape Verde?

Flight prices are reasonable considering from Europe you would fly six hours, also visa was included in a flight ticket and we paid 170£ with departures from major UK airports. Last minute purchases are even cheaper, I saw as low as 99£.

Accommodation, meals and attractions are reasonably priced, similar as you would get in southern Europe, so not as cheap as Latin America or South East Asia. But Africa is never cheap – contrary to popular opinion.

Will you visit it again?

Maybe. But I rarely visit remote countries again. I’m surely not visiting same Sal island, but maybe other islands are worth visiting as well because each is different, some are more tropical, some having peaks up to 1 800 metres.

What are your general thoughts about Cape Verde?

It’s definitely worth a week trip to Sal island to enjoy 365 days of sunshine.

Best wishes and no stress,

« Where go to northernmost places on budget? Osvaldas year 2017 in photos and resolutions »