Mauritius: The most amazing festival I’ve ever visited!

The purpose or excuse for a trip to Mauritius was an Indo Tamil festival called Thaipoosam Cavadee. There is never a perfect time for an overseas trip. But if you want to visit a specific country and can’t decide on time then just research for festivals and visit them. This is what we did and we couldn’t be more satisfied with the festival.

After 36 hours journey from Leeds, we reached Mauritius in the morning. Straight after landing we rushed to catch a local bus. We boarded the bus where most women were sitting with bright, fancy Indian dresses. Some were with a makeup and most with a big red dot between their eyebrows. On the way, more people joined dressed up fancy. We asked them whatever they are going to the festival and followed. The took another bus and reached a river. The celebration already started!

Preparation before day of the festival

Most Hindus in the island fast 10 days before the event. They should refrain from any kind of meat.

Participants prepare wagons with mainly red flowers surrounded by amounts of greens which is all formed into a statue. Many incorporate religious Hindu paintings or sculptures as well. Incense is also must for the carts. Whole wagon preparation would take at least a day. Its a family activity.

Preparation on the day before the walk

Much is happening on the day at a spot for travellers delight. The action was near river few km away from the town. Bright pink colours attracted our attention, which was hard to miss.

Participants are also pierced with uncountable from a first glance amount of needles with a hanging Christmas tree toy-like items. 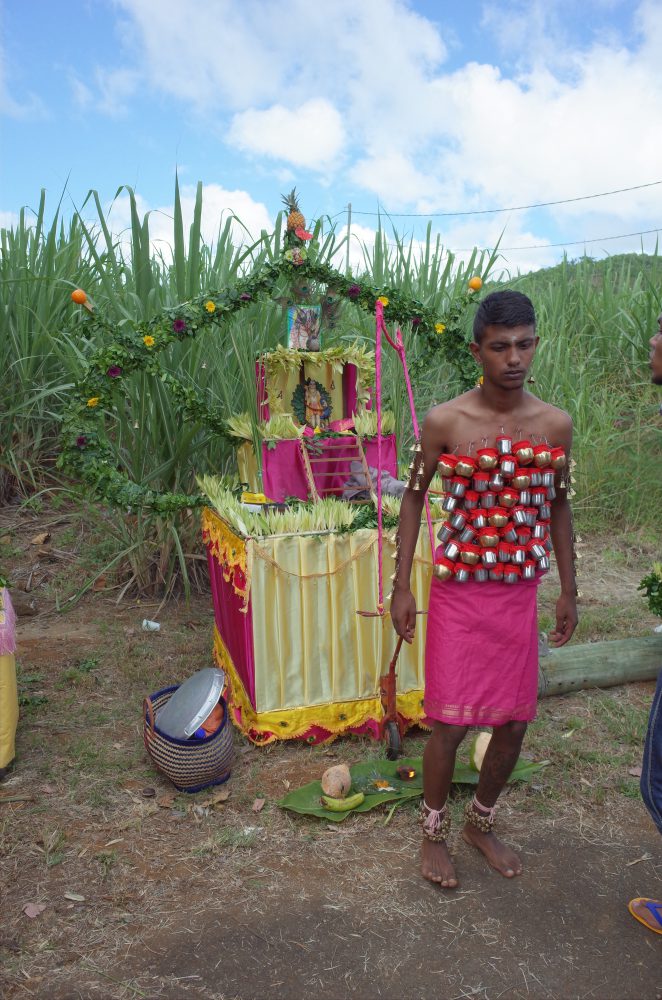 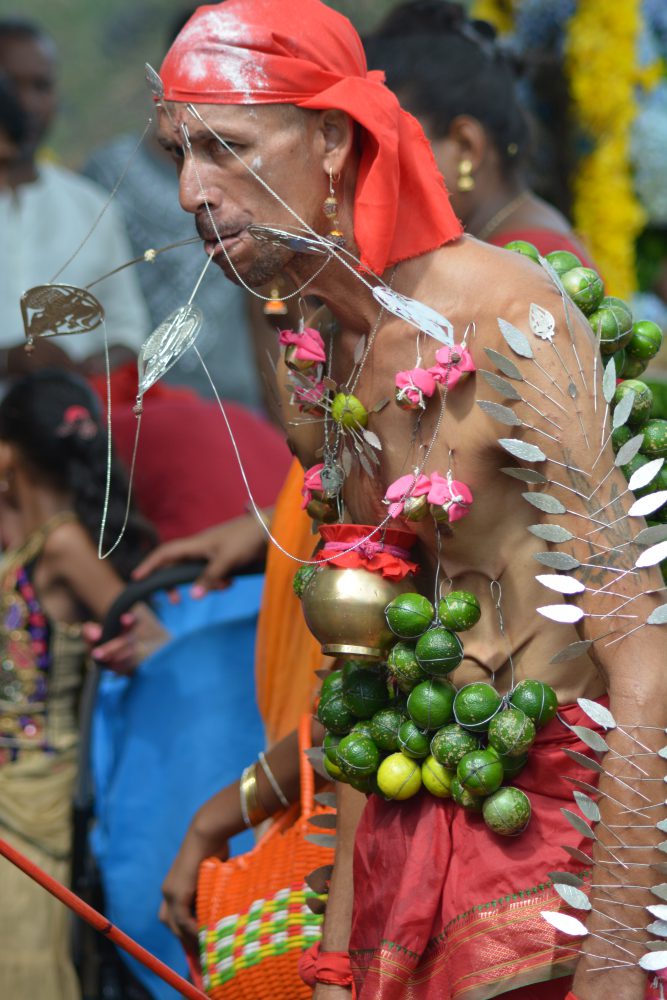 Firstly, wagons were blessed by the local Hindu priest with a coconut water and burning incense. Following this most painful action will take place, which is putting a long needle through the tongue. This attracts lots of curious spectators as participants scream silently with their faces. You could see tears building up in their courageous eyes. The needled are few millimetre in diameter but some want to show off piercing thick stick through their cheeks. 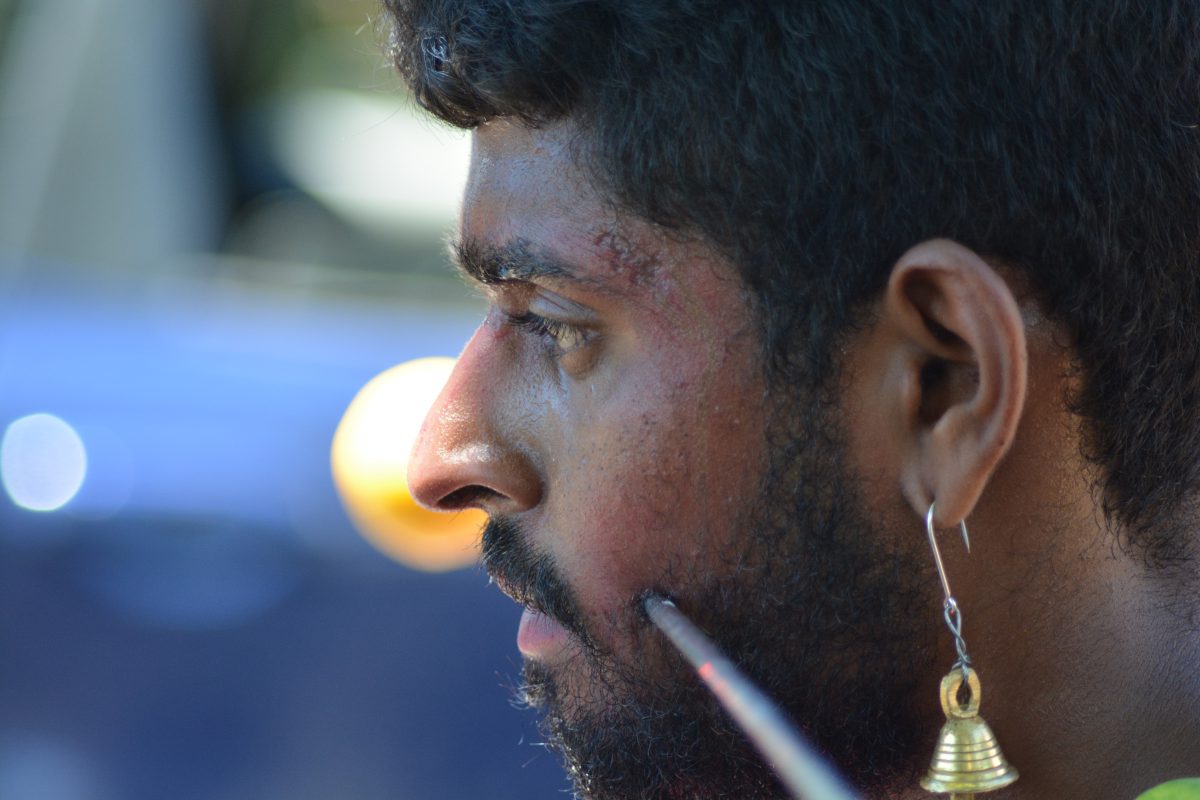 Next step is to pierce pulling wire through the skin and attach cords to the cart. Yes, volunteers pull the cart with a cord pierced through their skin. This gets extra painful as roads are hilly and contain potholes. Do you still remember that their tongues pierced and they cant talk? 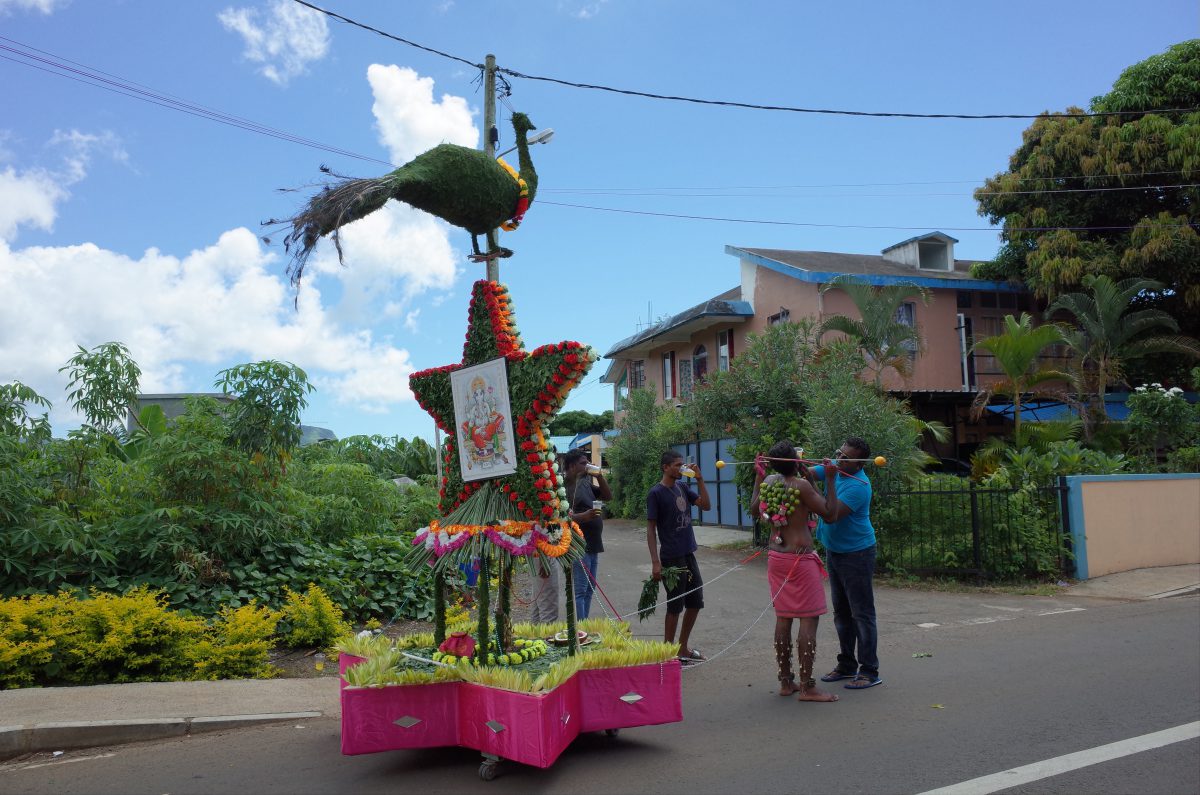 Participants pull carts to a temple located few kilometres away in a town. On the way, locals refresh them by pouring water on them or giving traditional soda drinks. Participants are supported and followed by their families. 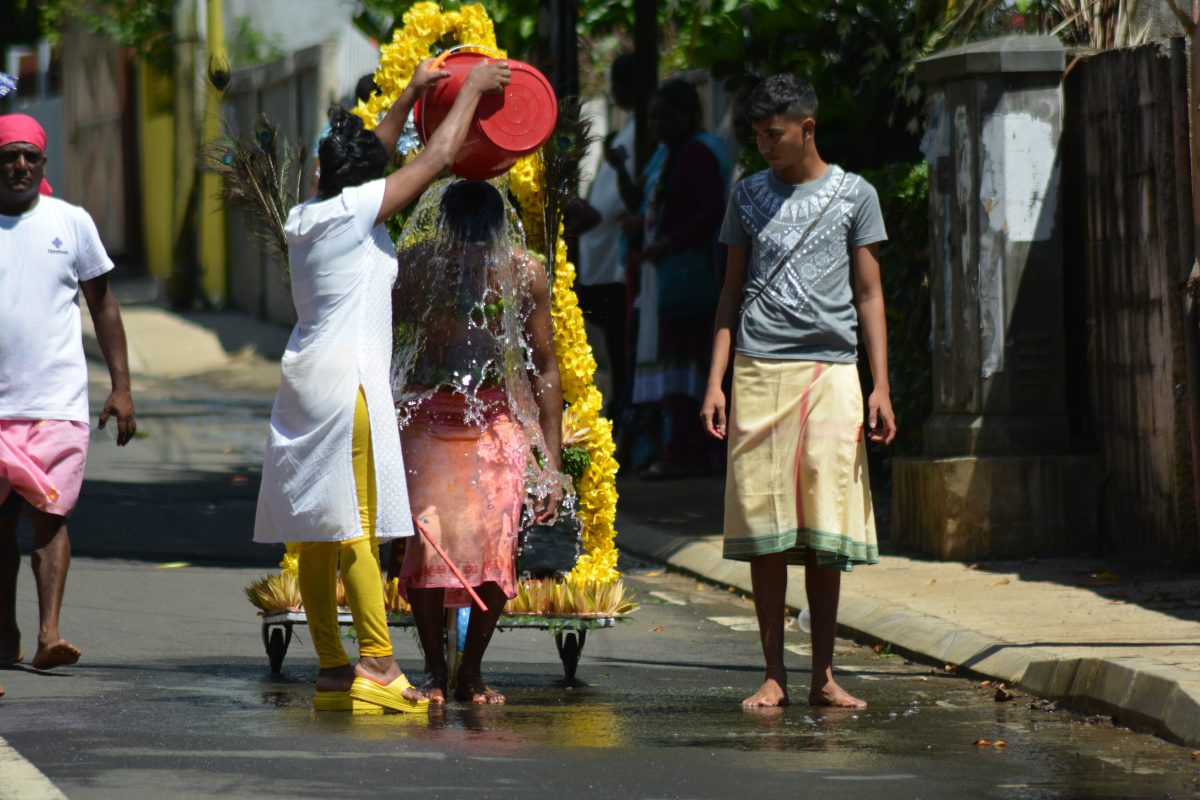 This reminds me of an ultra triathlon my brother participates. Both events are physically difficult and painful. Both include support by family and stared by local public, usually cheered with drums and loud music. Both end up with a filling meal for a whole family. It looks like ultra triathlon is western alternative to Thaipoosam Cavadee festival.

Back to Mautirius. Participans pulling carts are on the way to a temples, cheered and adored by general public. When they reach a temple, its crowded, so they end up queing outside on intensive sun. 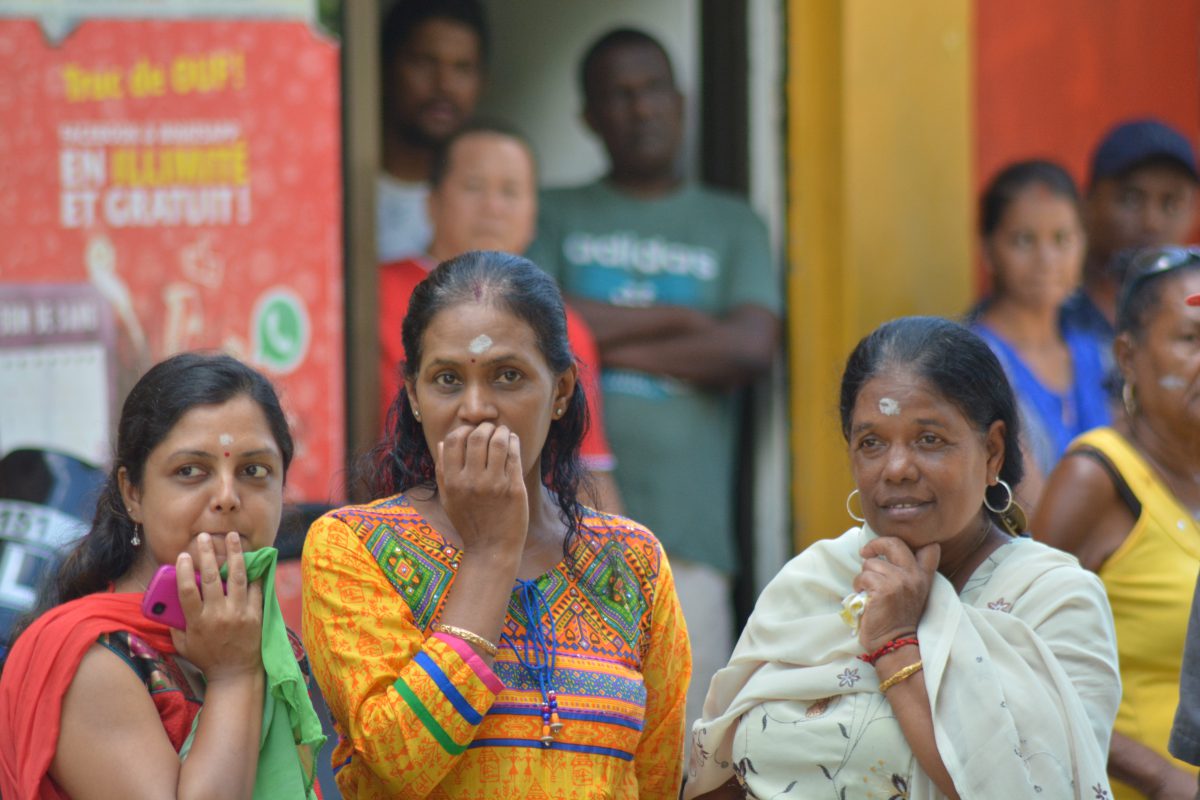 Many people are inside a temple already, watching cerimony. When participants enter it, they head to a priest who sacrifices milk they been carying in carts to Gods and gets blessing. As they leave the temple, needles are removed with specialist supervision. 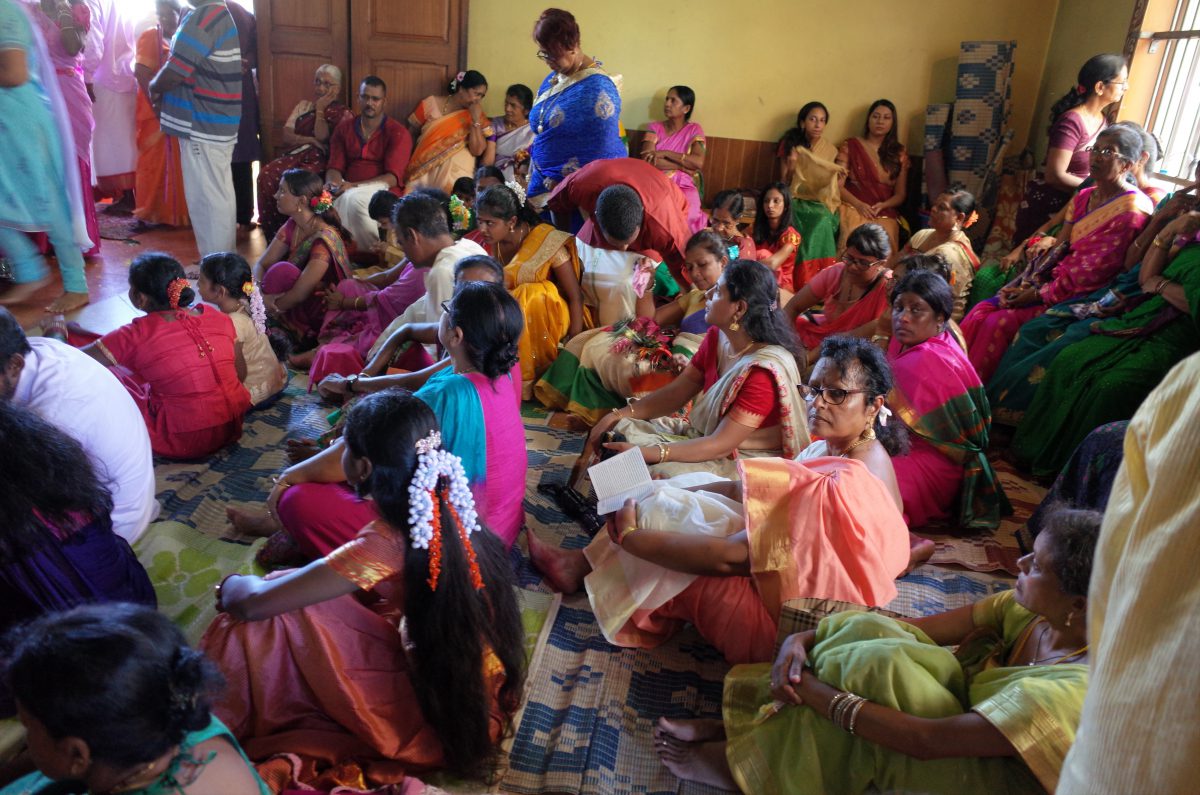 That’s it. Now time to invite extended family and friends for a meal. We got invitation as well and tried the great curry with rice.

Why people do this?

This is it, next is blog post about Mauritian wedding tradition with photos and video

Best wishes from the Indian Ocean

« Squatting. On the way to breaking my PB Mauritius FAQ »